Change Can Be Easier 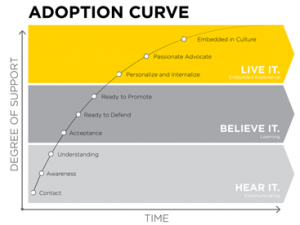 Companies invest millions of dollars and thousands of hours on complex change initiatives to make them more competitive and more efficient. But the chall


Companies invest millions of dollars and thousands of hours on complex change initiatives to make them more competitive and more efficient. But the challenge isn’t what’s changing, it’s getting people to accept and embrace a new way of doing things.

As humans, we are hardwired to hate change. Employees are working harder than ever, so changing how people get their work done can make even loyal employees grumble. Now, executives not only want to move the goal posts, they want employees to play on another field and learn a new set of rules. At XPLANE, we know change can be easier because we’ve seen it happen.

Get input to co-create the process and build support

Employees are much more likely to buy into and support a change program if you asked for their input into the solution.

A large client is streamlining and integrating all of its systems. The plan was completed by a small group of IT managers. While executives are convinced that the plan is vital to the future growth of the company, with only weeks before the program was announced, they realized they needed to get buy-in from different departments across the organization or the change might fail or drag on for much longer than planned.

So, they reached out to stakeholders across the company seeking input. Even though the big decisions about the change initiative had already been made, they asked questions and listened to people. This engaged key employees in helping to co-create a rollout process. They asked employees: What are your current challenges? Do you have other objectives? Is there anything else you think we should add? What are the benefits of change? Are there other opportunities?

Any time you get input from employees you give them a stake in the outcome and you move up the change Adoption Curve.

Align around your corporate values to build a case for change

If your change program aligns with your genuine organizational values, employees are much more likely to accept and promote it.

One of our clients was about to launch a change in systems and processes that would touch every employee. The company had a strong corporate culture and loyal employees. So the leadership tied the initiatives to the core corporate values.

For example, creating an exceptional customer experience was core to what the company believed and the new systems did that much better. Employees could see that the company was doing the right thing, even though integrating systems globally would create short-term challenges for them.

Make it clear so everyone understands

The first gut reaction to hearing about a new change initiative is usually: “How will this impact me?”

A lot of clients come to XPLANE (and come back to XPLANE) because we help clarify complex change issues. For example, several of our clients are instituting big IT change programs. These are so complicated that sometimes, no one on the team actually knows the whole story.

That team also is so deeply involved in the project that it’s difficult for that team to see the challenges or the benefits as the program is rolled out across the organization.

Visualizing the process makes the key decision points and handoffs clear, it helps change leaders understand where the biggest hurdles are located and it highlights gaps and overlaps in the plan.

Importantly, for the rest of the organization visualizing the change creates clarity and helps drive understanding and adoption of change.

Note:  We want to acknowledge that there are many variants of the adoption curve.  Others have called this representation of employees’ change journey as the change commitment curve, the adoption curve or the change management continuum.  However, it appears the earliest instance we could find was developed by change pioneers, Daryl Conner and Robert Patterson and referenced in “Building commitment to organizational change” (Training & Development Journal, Vol 36(4), Apr 1982, 18-30).