The first in the five-part Did You Know? Series. Thrive in the 21st century: introducing Business 3.0. 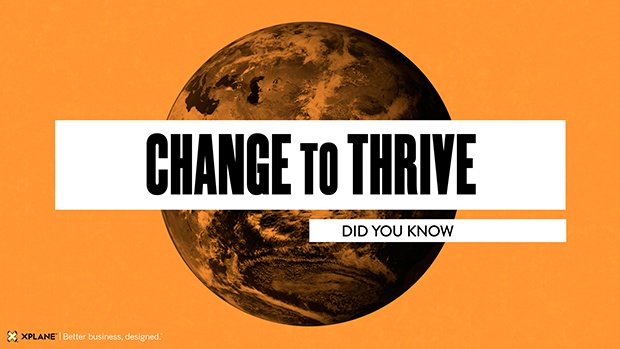 This first post of our blog Series introduces how companies need to embrace a new way of connecting with employees and customers. Its what we call “Business 3.0.”  The Did You Know? Series supports the release of our video, “Did You Know? 6.0: Change to Thrive.”

Change is the norm. Are you adapting?

Technology and behavior megatrends are reshaping business globally. XPLANE lives this reality with clients every day. To advance and grow, organizations need new ways to connect to both employees and customers, because old paradigms are costly. For example, Kodak was #43 on the Fortune 500 list in 1975. It went bankrupt in 2012. Borders was #485 in 2000, yet bankrupt in 2011. But those applying four new success skills in something XPLANE calls the “Business 3.0 era” can avoid similar fates. First, a quick look back. The Industrial Revolution was the largest disruptive transformation in commerce since the Renaissance. Simply, the nature of production was re-invented. Machines replaced hand-tools. Steam and other energy sources replaced human or animal power. Unskilled workers replaced skilled workers. Work performed in the home by the family was now performed in factories with the help of machines.

Enter silicon. It emerged to further upend norms. As a result, the late 20th-century technology and information revolution—hailed as Business 2.0—drove a socio-economic shift from manufacturing and agriculture to service industries. And it’s continuing. The web, mobile devices, big data and cloud computing are evolving core human experiences, such as how families spend their time, how people work and how societies interact around the globe.

Business 3.0: the landscape in detail.

The accelerated pace of change has caused extraordinary economic, cultural and competitive pressures. From robotics to nanotechnology to renewable energy, hyper-competition is now the standard. In particular, comprehending the rate of change and applying the rules of the game have become so challenging, only the most adaptive and fleet organizations will survive. Fixed, top-down plans are dead. Organic, flexible and inclusive methods are now the path to prosperity.

It’s easy to understand why it’s hard to get a footing. Massive external forces affect today’s business environment. For example:

In this complex, changing and even hostile environment, an organization can be viewed as a living organism. To evolve, it must operate as a complex, dynamic, growing system that can learn and adapt over time. This requires cultivating both a performance strategy and a healthy work environment. Adaptation and evolution to Business 3.0 is key to success in the decades ahead.

The next posts in the Did You Know? Series will focus on each of the four essential, 21st-century “success skills” for staying in step with change.