The Evolution of OMSI 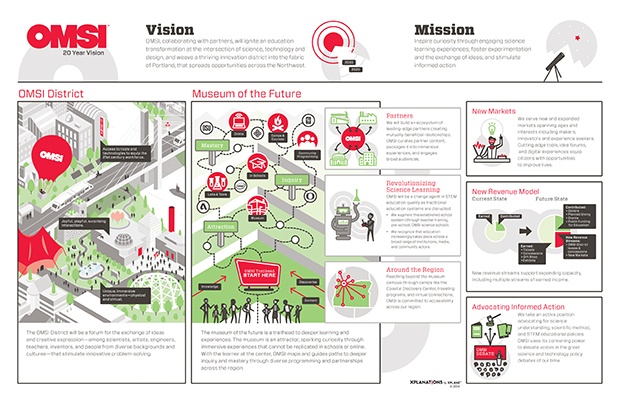 The Oregon Museum of Science & Industry (OMSI) is at a turning point in the evolution of its organization. Having operated successfully as a

The Oregon Museum of Science & Industry (OMSI) is at a turning point in the evolution of its organization. Having operated successfully as a regional museum for nearly 70 years, it is now embarking on an expansion of its programs, its geographic footprint, and its greater role in the community. Already one of the country’s leading science museums, OMSI’s vision for the future elevates it’s impact to include regional redevelopment in support of innovation and science education, as well as a significant expansion of its programs for all ages. Specific near and mid-term changes include the development of the Coastal Discovery Center in Newport, the renovation of the current facility including the Turbine Hall and Theater, and the redevelopment of the Central Eastside District property under OMSI’s control as well as the assertion of OMSI’s influence in the district at large. In the longer term, OMSI’s impact in the broader arena of science education and a redefinition of the museum of the future loom as priorities, with resulting shifts in programs and engagement strategies. Collectively, these have presented OMSI with the prospect of an expanded role and influence in the region in the coming decades, requiring a refined vision and strategic planning process in order to achieve the organization’s full potential.

XPLANE, through our Social Good partnership program (which provides pro-bono support for transformational organizations in our community) has been engaged by OMSI to support the development of a clear twenty year vision and mission statement, which have been recently completed. As a next step, XPLANE will support OMSI in the development of a long-term and annual strategic planning process to deliver the twenty year vision, as well as a communications program to create shared vision, align the organization and its stakeholders, and drive change.

Our partnership with OMSI will result in an end-to-end implementation of XPLANE’s change process and principles – from visioning and strategic planning to execution and employee alignment. Moreover, the specific planning process we’re developing with OMSI is intended to equip the organization with a repeatable process and toolkit that the organization can continue to use well beyond the term of our engagement, building increased capacity for OMSI for the long term. We’re thrilled to be able to work with an organization making such important impacts in our community, and look forward to reporting on future results as the continuing engagement unfolds.