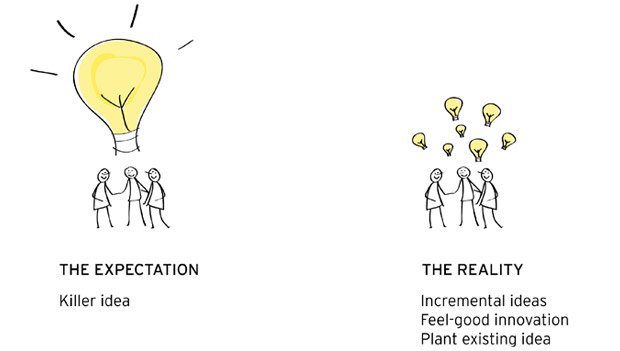 The concept of brainstorming, now mainstream in many organizations, originated in the 1940s and has gained momentum over the years as part of the broader trend toward collaborative work and open-plan offices. In his book, “How to ‘Think up’” (1942), advertising executive Alex Osborn proposed a then-revolutionary approach for generating creative ideas in groups. A key idea was that “it is easier to tone down a wild idea than to think up a new one.” His core principles included:

Brainstorming has recently come under attack for yielding mediocre creative results. Detractors argue that it’s a poor method for generating big, innovative ideas. Some admit it has its uses, from generating smaller, incremental ideas to giving groups a sense of feel-good innovation to (more sneakily) getting political buy-in for pre-existing ideas. However it is generally argued that it falls short for two reasons: first, because individual creativity trumps group creativity. Second, because social dynamics often lead people to conform and generally lean toward the safer middle ground. We believe things are more nuanced. Creativity is enhanced when we don’t hold on too tightly to our ideas but give them room to grow and evolve. This is where group collaboration really helps. We feel that brainstorming can be of real value, provided it is used under the right conditions and for the right reasons. A good brainstorm requires:

In Gamestorming (2010), authors Dave Gray, James Macanufo and Sunni Brown explain that effective group processes—from games to meetings to brainstorms – have a common structure that looks like a two-pointed pencil consisting of open-explore-close phases. Brainstorming is no exception: we generate a large number of ideas, explore and combine them, and select the best for further refinement.

We can think of the creative process overall as consisting of many nested pencils. Brainstorming would likely be just one of several processes used to generate directions in the Open and possibly Explore phases. XPLANE’s Amsterdam office recently ran a Visual Thinking School event* called “Brainstorming on Brainstorming” to explore and test some key principles for effective brainstorming. We gave ourselves this challenge: how might we increase the quality, and not just the quantity, of our ideas? Based on our research we decided to focus on three key principles:

Here’s what we did:

Icebreaker: We kicked off by asking people to share what they do and where they go to feel creative.

Warm-up (this was in lieu of preparation on the topic): We split the 20 participants into two groups. Each team received a challenge that was hidden from the other team. The first group was asked to think about what makes Amsterdam a great city. The second group was asked to think about what makes the Olympics great. They had three minutes to generate ideas on their topic. The rules: to generate ideas individually, in silence and writing only one idea per Post-it. Just when they seemed to be slowing down we asked them to dig deeper and think of three more ideas that were significantly different from what they already had.

Post-up: Both groups posted their ideas and the entire group was given time to absorb ideas about Amsterdam and the Olympics.

Set a clear goal: Next, we gave the group the challenge of coming up with ideas to persuade the Olympic committee to host the Olympic games in Amsterdam. Their task was to answer the question, What would make the Olympics in Amsterdam great?

Team up: Next we formed teams of four consisting of two individuals from the Amsterdam and Olympics groups. Their task was to share, combine and refine the ideas on their index cards and develop them into a core concept.

Share: Finally each team was asked to pitch their concept to the wider group.

The ideas that emerged were original and often hilarious. One group proposed extreme Olympic sports based on the urban morphology of Amsterdam (think sharks in the canals for swimming events…). Another group proposed “Open games” based on two events: one in the Olympic compound open to athletes, another in the city center open to ordinary citizens. Another chose a Green concept, proposing ideas for zero-footprint Games.

Would the Olympic Committee sign off on these ideas today? Of course not. But in less than two hours these teams were able to come up with original, new concepts that could be refined and deepened in successive stages of a creative process. They had fun, felt energized, and left the brainstorm inspired by what they had created in a short space of time.

The feedback we got was that the experimental warm-up exercise where we divided the group to think separately about the two halves of the challenge and then combine their thinking worked very well. People felt a sense of ownership and “expertise” for their half of the challenge (Amsterdam/Olympics) while also benefiting from a broad set of inputs for the other half. This created a sense of individual confidence coupled with open-mindedness that made for good team thinking.

Our takeaway from this experiment is that there is a useful role for brainstorming provided it is framed in the right way and is carefully designed and facilitated to bring out the best of both individual and group thinking.

* XPLANE runs open monthly events called Visual Thinking School (VTS) where we invite anyone interested in visual thinking to enter the sandbox with us, experimenting with different tools and methods to solve creative and business challenges.