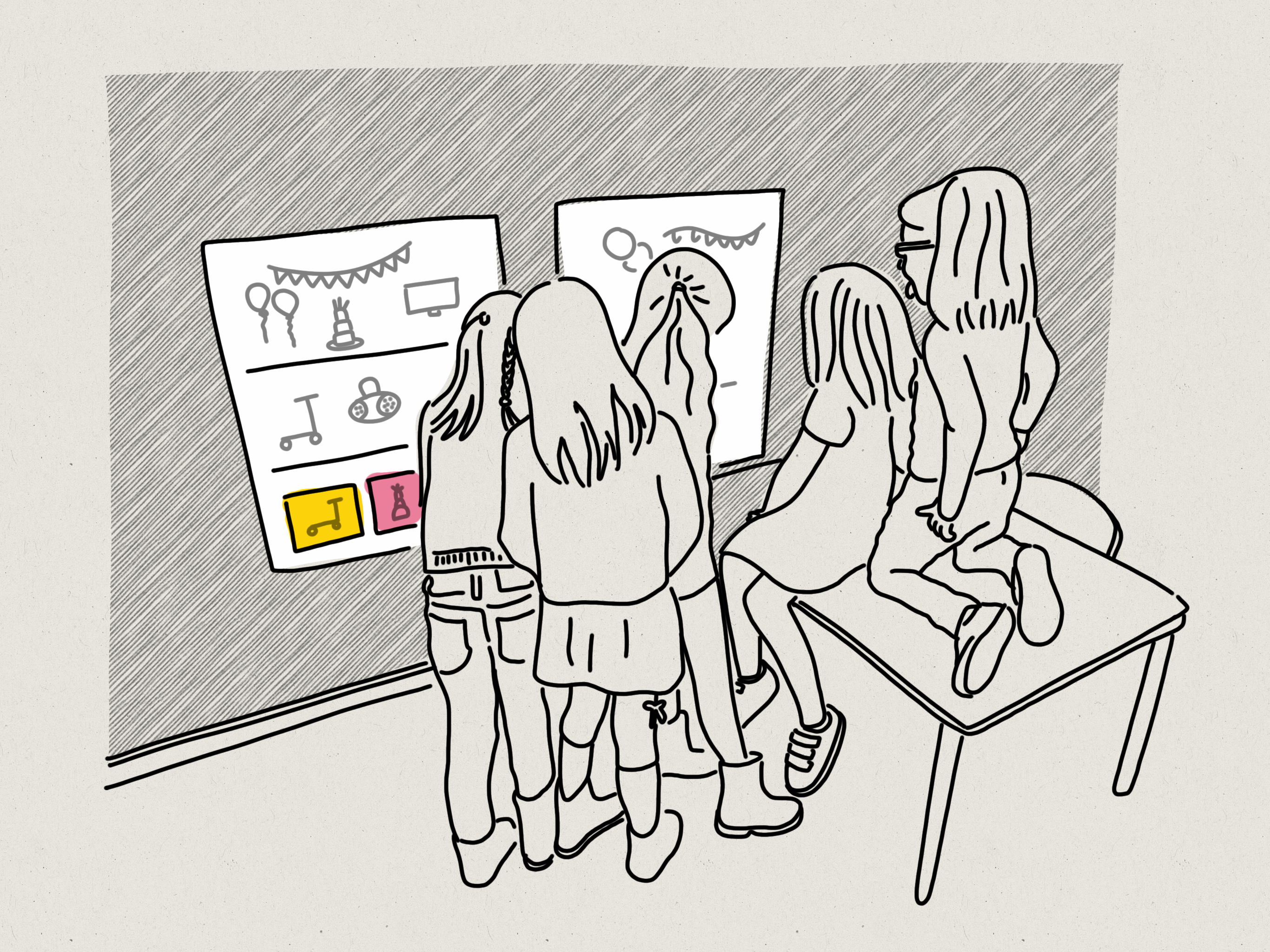 Whenever we encounter people in our workshops who say, “But I can’t draw!” we remind them that all five-year-olds can draw. And since YOU were once five years old, you can draw too!

Last year I was able to facilitate classes at my five-year-old daughter’s school, which was a great opportunity to test that theory. And it wasn’t just the drawing that amazed me at the end of the class; it was so much more.

Let’s start from the beginning.

Just as XPLANE designs our workshops around our participants’ needs, I designed this class with three specific goals in mind for the kids. Since they were mostly new to each other and meeting for the first time in this class, my first goal was to help them get comfortable with one another. Secondly, I wanted to teach them basic visual thinking techniques, and finally to create an experience focused on the process, not on individual performance.

We started the class with an icebreaker. I asked the kids to draw their favorite activity on a large post-it. Not only did this icebreaker help the shy kids quickly prepare a personal introduction, it also gave them a tangible visible example of how to show and tell something about themselves. It’s easier to talk when everybody is looking at your drawing, instead of at you!

After the icebreaker, I spent a little time teaching the kids some basic visual thinking techniques. Doing this helped create a shared visual language based on communication, and created awareness around the power of drawings to communicate, instead of just as an art form.

Once they were armed with these basic skills I asked them to place the post-it of their initial drawing (the activity they liked to do most) on a simple canvas divided into three equal parts. Then they were asked to place their drawing in the last frame. With this in place, I asked them each to draw two things one must do prior to “the activity you like to do most.” They all completed the exercise which helped them (1) to think about the process involved in doing something, and (2) to use drawing skills to communicate and tell their story.

So far so good. The activities completed so far made the class a success already in my eyes. All the goals I had set prior to the class were met; they introduced themselves to each other, and they learned a few practical things via the drawing exercise. But since we had time remaining, I introduced a final exercise. I asked them to pair up and combine the “activity you like to do most” drawings on a new canvas. These combined drawings led to completely new things one must do in advance of the activities. At this point, the kids began to really collaborate! Within an hour, shy kids were enthusiastically engaged in the discussion, the activities, and co-creation. All the kids were literally drawing together. With their hands stretched over each other, they added elements to each other’s drawings and built further on each other’s ideas. Once they were done they had no problem presenting their ideas; after all, people support what they help create or build.

Seeing this work so well with children re-confirmed for me how powerful visual thinking is. Even five-year-old kids were easily engaged, enabled, paid attention with respect, and able to build freely on each other’s ideas. Not only that, they all proudly supported the outcomes! Imagine what visual thinking can do for grown-ups, who have almost double the attention span and likely more serious activities to execute.

In case you are still in doubt, please remember you too can draw! Let go of the idea that drawings should be pretty. It’s NOT about pretty. You don’t have to be a poet to write an email, after all!

Unleash the power of visual thinking in your business (and life)! If you need guidance, or a push in the right direction to start your journey, good news: XPLANE will be hosting a series of visual thinking boot camps for grown-ups soon! If you want to learn more and/or brush up on your visual thinking skills, check out our learning page for further information.