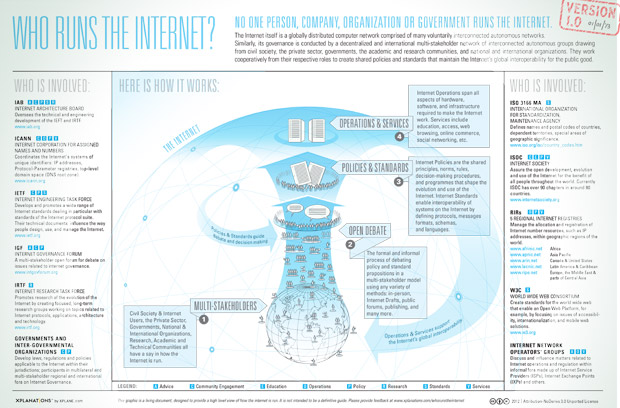 XPLANE recently completed a new project with The Internet Corporation for Assigned Names and Numbers (ICANN) that will help the organization to better communicate its role, mission and service offerings to key stakeholders. ICANN’s mission is to ensure a stable, secure and unified global Internet. It is a not-for-profit public-benefit corporation with participants from all over the world dedicated to keeping the Internet secure, stable and interoperable. In October 2012 ICANN welcomed new CEO – Fadi Chehade – who brings with him a reputation as a strong communicator, collaborator and consensus builder. ICANN’s inclusive approach includes the public sector, the private sector, and technical experts working together in a complex set of organizations. Because these structures and workings of ICANN can be confusing, Chehade views the visual communications designed by XPLANE to be an important component in the delivery of ICANN information in a clear, understandable and compelling way.

The project, which was completed in late 2012, called for the creation of a high-level, comprehensive infographic that clarifies what the Internet Governance Ecosystem is and what it does, as well as a separate map that drills down into the specific ecosystem of ICANN.

XPLANE produced the final deliverables by executing a phased, visual design thinking approach that was highly collaborative and iterative. The process needed to ensure strong transparency and alignment amongst several different stakeholder groups in order to ensure key messages and takeaways were communicated easily and accurately.

XPLANE’s process of using low-fidelity, “napkin sketch” visual prototypes to gain input and enable quick revision proved highly valuable in ensuring members of the greater ecosystem had opportunity to influence the project and how the members of the community would be represented. The hand-drawn format proved so successful that ICANN chose to keep their final first version of the maps in that sketch format, as a nod to the understanding that this ecosystem is going to change over time and continue to evolve. Further expression of the belief that this visual is to be owned and shaped by the broader community is XPLANE’s establishment of an independent website designed to gather regular feedback and comments on the visual.

“ICANN was very conscious of ensuring that their actions throughout this engagement reflected their belief that all users of the Internet deserve a say in how it is run,” said Patrick Dodson, senior vice president of business development at XPLANE. “A process that allowed all parties to participate and see how the visuals were being made was critical. The alignment driven by the collaboration and co-creation required throughout the project was as valuable, if not more so, than the final visual that was produced.”