He Came, He Saw, He Conquered 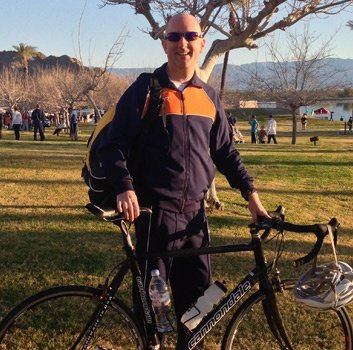 In March, Patrick Dodson, senior vice president of business development at XPLANE, completed the Desert Triathlon in California. Get the behind-the-scenes scoop on the race and how he managed to squeeze months of dedicated training into his busy work and family schedule. Q: Have you participated in a triathlon before?

A: Yes, I have participated in short-format triathlon race but it was at least 10 years ago – before marriage and kids and career took over my schedule.

Q: What motivated you this time to participate in the Desert Triathlon?

A: I started to feel inspired to get in shape after watching last summer’s Olympics. I also had a milestone birthday coming up, so I decided to find a race that I could participate in around that timeframe.

Q: How do you stay motivated to exercise?

A: I’m definitely one of those people who needs to set a goal to be motivated to work out. I signed up at a local gym so I could swim and run indoors (definitely not motivated to run outside in Oregon’s wet winter).

Q: What was your exercise program to prepare for this race?

A: I worked out six mornings a week, and I started eating better as well. With a healthy diet and exercise, I was able to shed 20 pounds during this process!

Q: How did you learn about this triathlon?

A: I did some research online and found a race that looked appealing in Palm Springs. My wife and I decided to go together and make a vacation out of it. Being somewhere warm and sunny in early March was terrific. The timing was great because we were able to celebrate our wedding anniversary and my birthday, in addition to the race itself.

A: The race itself was fun, and I was happy to come in under my goal time by several minutes. The weather was amazing, and it was fun to participate alongside other athletes.

Q: What is next for you?

A: Well, I have already signed up for my next race which is in Portland in June. And, I really could not have done this without the amazing support of my wife. She took care of the kids in the morning so I could work out, and was always supportive of the hard work I was putting in.