Changing the State of Education 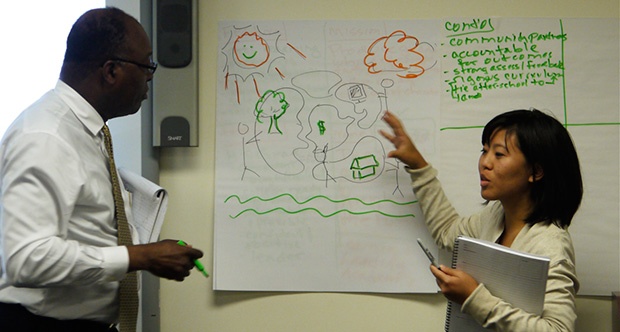 On October 26, an esteemed group of leaders from urban education, industry, universities, government, foundations and trade associations gathered at West Point to discuss the future of education. Organized by the non-profit Schools That Can, the group came together with a common goal: to seek clarity around the issue of “Accelerating Teaching of 21st Century Skills for Jobs of the Future.” XPLANE Senior Consultant Roel Uleners facilitated portions of the day’s meeting.  Using his visual thinking consultative skills, Roel leveraged the varying personal expertise and experiences in the room to discover different perspectives on the issues; identify factors in play; and seek clear steps to realize measurable change. And change is much needed. Recent data offers a stark picture on the current state of education and employment. Did you know that:

•  41% of all college graduates in 2012 were either underemployed or unemployed?

•  3 million well-paid skilled jobs went unfilled in 2012 because of lack of qualified people to fill them?

•  Only 8.2% of low-income students graduate college?

Up until now, the lack of communication and consensus amongst key stakeholders has led to a significant misalignment issue. Bringing the different parties together, listening to all sides, identifying the challenges and co-creating solutions was a great first step toward building a brighter future. The hope is that by finding common ground and discussing immediate next steps the stage has now been set for a nationwide change in education.