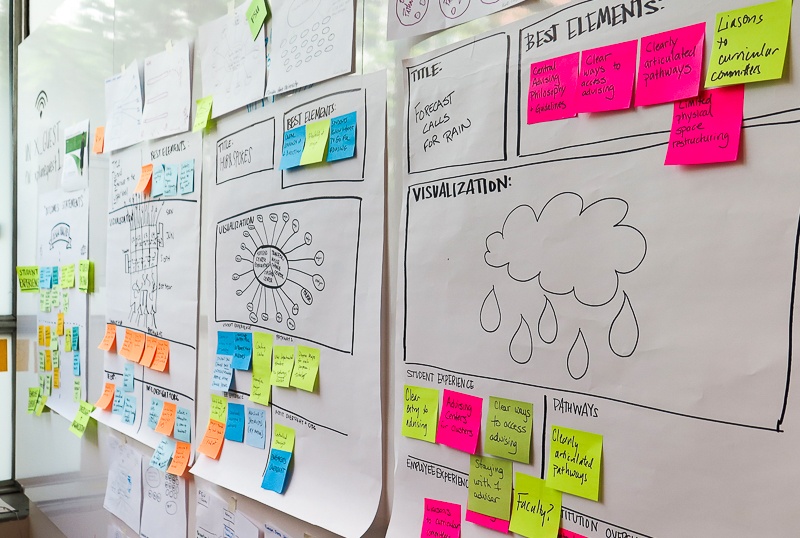 “This” is visual thinking and the “we” are professors from the top MBA programs around the world at the annual meeting for the Production and Operations Management Society earlier this month.

Tucked into the challenging post-lunch slot, after papers on supply chain and before presentations on sustainability, XPLANE stepped in to demonstrate the value of visual thinking.

XPLANE was asked to present because several of the professors said they are under pressure to make courses more interesting and interactive and to give students tools they can use once they go back to the business world.

Working every day with designers it’s easy to forget that some people, like the professors in front of me, were doing math problems when they were five instead of drawing pictures, so what struck me was how quickly this group of people began to draw.

And, however rudimentary, their drawings immediately connected with their colleagues demonstrating the key benefits of visual thinking. Some of the professors drew buildings, trucks, and boats and some drew boxes connected by arrows. It actually didn’t matter, because everyone could see clearly the steps in the process they had created.

One professor drew circles and arrows and then used triangles to indicate areas where the process could be improved. He represented the improvements with dollar signs if there was a cost saving, with a clock face if there was a time saving, and a lightning bolt where there were energy savings. The point he was trying to convey was immediately clear.

In nearly every session we facilitate at XPLANE, people tell us: “I can’t draw.” But in every session everyone draws. Stick figures, shapes, and arrows are some of the most valuable tools of visual thinking.

Pictures help people see where they might agree or disagree

At one table, a group of the professors were trying to visualize a concept. As they each attempted to draw it, they realized they see it and teach it slightly differently.

This commonly happens in our work with organizations.  A team will start talking about a proposal but it’s only when they draw it that they understand where their concepts differ.

We worked with one organization where the team was split and three groups said they wanted to go in very different directions. But when we had each of the team members draw their vision of the future, we discovered that they were much more closely aligned in their vision than they expected. As soon as they saw that the area where they disagreed was actually fairly small, the tension in the room evaporated and they focused on finding a solution.

At the end of the session, the teams of professors shared their best ideas for using visual thinking in academia. The idea with the broadest appeal: getting students or teams of students to draw processes and systems in class so they learn and remember more.

It’s true, we do grasp things more quickly and remember them more clearly when they are visual.  Nearly 75 percent of our brain’s sensory neurons are dedicated to visual processing which helps us retrieve pictures far more easily than written words. When we see a picture we are more likely to remember and be able to explain the idea to others.

And at the conference we had immediate proof that the principles of visual thinking were at work. At the presentation just after XPLANE’s session, a few of the professors were spied sketching alongside their notes. Looking for some tools to help you and your team get started with visual thinking? Download our Visual Thinking Sketch Notes eBook for the brief science behind visuals and easy-to-use tools to apply to your note taking.