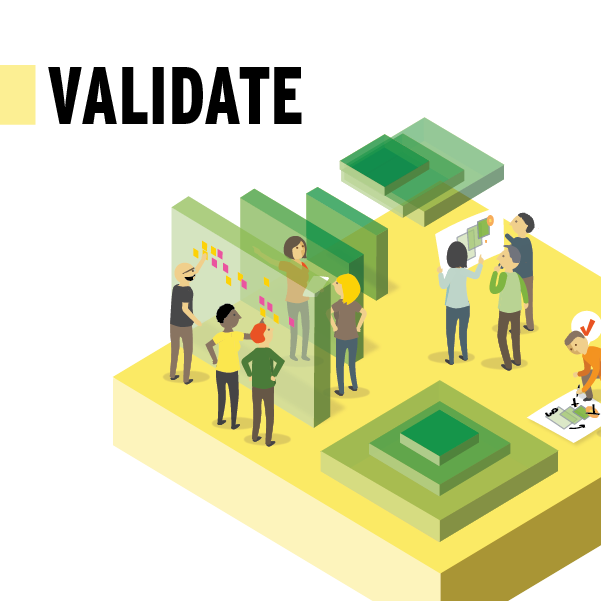 Process validation helps you learn what’s working and what’s not before the expensive (in every way) steps of activation and embedding. Process validation can be a silver bullet in successful process innovation. It helps you learn what’s working and what’s not before the expensive (in every way) steps of activation and embedding.

How do you validate a new process?

Validate it by putting it on its feet in as real an environment as possible. Whether that’s done in a safe “sandbox” environment or a riskier live environment depends on many different variables. Here are a few critical considerations when designing validation tests:

In solving for these challenges, beware of unintended blind spots that come from short-changing reality in testing scenarios. For example, by not running a shipping process in a real time / real space environment, you might miss that cargo is now left sitting in the sun for hours because that in-between step was not included in the testing workstreams.

Why do you need to validate a new process?

Activating a new process before it’s ready is the surest path to failure before it ever had a chance to succeed. Socializing and validating a planned future state lets you

User Acceptance Testing: Again, you can kill three birds with one stone: introduction, feedback, and support. Using the current and future state maps, you can introduce the process to its users; get their feedback for improvement; and through this socialization, begin to build support for it.

Test Cases & Stress Testing: Used for years across many different engineering disciplines, test cases and stress testing helps you plan for what the process is designed to solve and how it might be stretched with the unexpected.

Scenario Walk-Throughs: When performers from rockstars to actors to politicians prepare for a performance, they do many walk-through rehearsals to work out the kinks, so they know they’re ready for the real show when it’s time.

Quantitative & Qualitative Measurements: Whenever possible, it is important to test a new process using the quantitative and qualitative measurements used in the actual live environment.

Dave King is the Vice President of Client Services at XPLANE in Amsterdam.